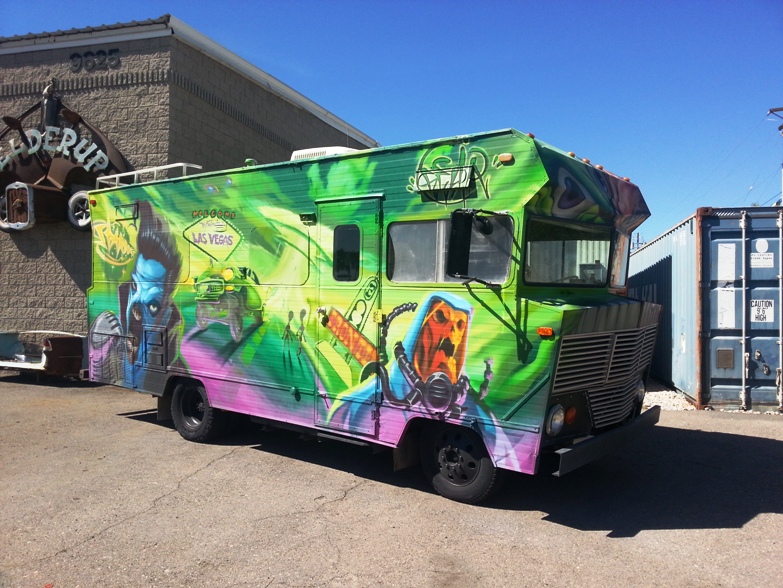 So Welderup, what did I expect? An elaborate film set with a dirty workshop out back where real men in ripped jeans work long hours to tight deadlines whilst the cast and crew members drink beer and throw them the occasional cheese sandwich? Or maybe a museum display of every build that has graced our screens and some cheeky ones that they ‘Snuck in’ to induce panic into those who thought they had seen every episode? Dirty sweaty men out back, tour guide up front?

Did we have to pay, did we need an appointment?

We were still sitting in the car and the place seemed really quiet, nobody around that we could see. What broke the silence was a guy reversing a fork lift truck at speed towards us, tanned and toned in cut off jeans. He spun around and picked up a 57 Chevy with the same ease as a Granny putting cake on a cake slice. After acknowledging us with a wave he headed back inside.

We followed the forklift inside and the place was everything I had anticipated with the exception of the dirty workshop outback. The real men were the cast members, hard working guys with years of experience, expertise and a great passion for what they do. It became obvious quite quickly why the business had become such a success. They have the perfect work/play balance and still remain incredibly humble. Each one of them that day took time out from what they were doing to speak to us

We learnt from Travis Deeter, (Welder/Fabricator and artist) that the deadlines you see on screen run true to how we see them. Ian seemed to bond with him on an artistic level. He explained that one problem he has with the filming is continuity, stopping and starting breaking the flow of progression and being in the zone artistically. 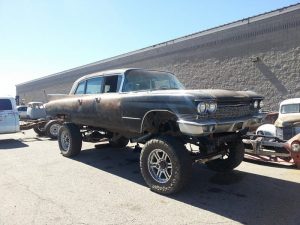 I wandered around some of the cars from the show but I’m going to leave the photos to speak for themselves with the exception of ‘Quit Your Bitchin” A 1930 Ford Model A Rat Rod Gasser, it’s a crazy kind of steampunky, vintagey, I’ve been down the scrapyardy and turned old metal into pure gold type of thing. Initially commissioned by Steve’s brother, who was on limited funds, it seems his brief and budget messed with Steve’s flow and progression and the frustration of having restrictions led to Steve, who just doesn’t seem to do anything by halves, sinking a whole load of his own cash and a Hemi V8 he had been saving for that special something into the build. Differences of opinion led to words being spoken that sometimes are saved only for family in business situations. I believe that’s where the idea for the name came from. At that time ‘Quit Your Bitchin” was rightly taking centre stage. 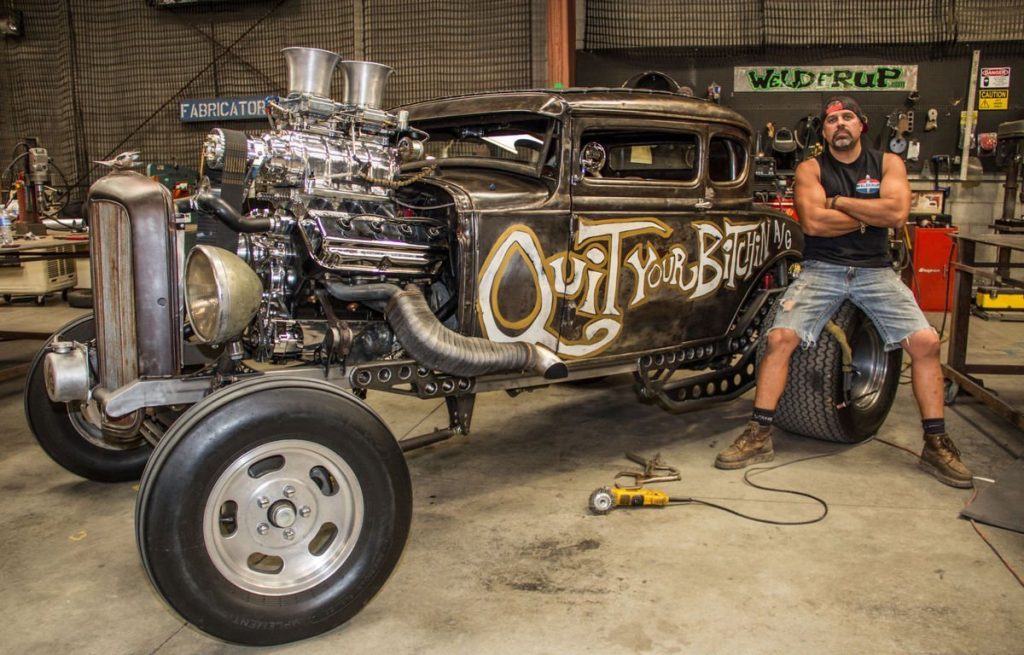 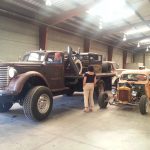 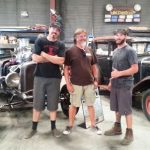 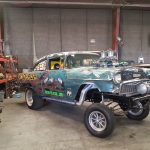 Whilst Ian spent some time looking around the cars I got some alone time talking to Steve but not only was I distracted by his eyes I had a massive hangover from the night before.

“How did you get into all of this?” I asked, immediately ashamed at my lack of imagination and knowing that he must have been asked the same question a million times before.

This is what I remember …..

Ian had arrived completely star-struck but chilled out pretty quickly when it became clear that these incredibly talented men are just your down to earth types. Steve putting his work ethic down to his father and grandfather, his two heroes apparently.   Whilst we were sitting in the car park deciding where to head next Travis left in his truck, sounded his horn and waved, Justin did the same. Ian lifted his hand and headed back into fairyland …

Tryin’ to get a Lie-in in Zion

The map told us we were at the bottom left side of Vegas, our heads told us to step away from the lights, not because we were scared of re-entering the city and becoming part of a 1970’s cop drama but because they actually hurt. Extreme heat and an excess of alcohol the night before was calling for one thing, a tower of meat, cheese and what ever else can be crammed in between two loaves of bread, eaten maybe in a field with a donkey rather than in Egypt, Paris, or at The Circus.

We had a vague plan for the next week, starting with “We are here” and ending up with “We need to be there” The place we needed to be was Monument Valley in a few days time but up until then the road was ours. A few things needed to be sorted, firstly “Ok where next?” and our bag of ice was now fit only for a goldfish. 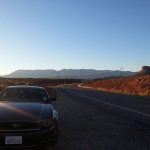 Interstate 15 runs North to South through the West Side of the USA from the Mexican border to Alberta in Canada, cutting through Vegas. We studied the map for 5 seconds and decided to head north to Zion National Park and Canyon around 200 miles away. The 15 would get us there quicker, but there was a more scenic route that took us to the left of Lake Mead through the Valley Of Fire state park later joining up with the 15 just south of the Arizona border. Scenic routes on our American Road Atlas were marked with a dotted line and looking at the map you could see that there were countless options to have your mind blown, we took routes 167 and 169 and they did just that. Meandering and undulating through a deep sided valley, dark red sandstone towers either side of you, kind of more craggy than what we had experienced already on our trip, they were formed apparently from great shifting sand dunes around 150 million years ago! With the sunlight on them they glowed and cast the most amazing light. I am a sucker for terracotta against blue and it was offering it to me on repeat. 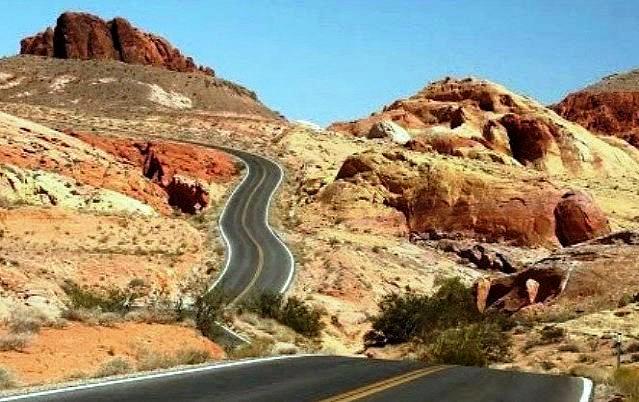 Back on the 15 the road leaves Nevada and cuts through the top left corner of Arizona for around 30 miles before entering Utah. I Googled Zion National Park and this is what I got, “229 square miles with Zion Canyon, a prominent feature, 15 miles long and half a mile deep. A scenic drive cuts through the main section leading to forest trails along the Virgin River. The river flows to the Emerald pools which have Waterfalls and a hanging garden”! What an offering! How is it possible to be given such vast extremes of ‘Wow’ over just a few hundred miles?

Closer to Zion and you definitely do start to notice the change in landscape together with the increase in hotels, motels, places to shop and stop and eat. We had already had our burger tower, eaten a small corner and put the rest in the newly stocked fridge to keep us going for the rest of the week! We had decided to get as close as we could to the park entrance before we stopped to try and find a room. The first place was fully booked and I did feel a need to take my shoes off at the door, over the road also booked and was also very clean and shiny. Attempt number three put us back on the road in the car heading back in the direction we had come. 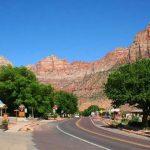 Long story short we didn’t end up visiting Zion National Park and were starting to wonder if after falling in love with Beatty and Death Valley nothing could compare and we were now happier on the road, enjoying the journey and the scenery rather than the destination, car park, gift shop and visitor centre.

On our last attempt at finding a bed anywhere near we were told that if we actually wanted to enter the park we would have to take a guided bus tour. Apparently cars aren’t allowed inside between certain dates and we were between those dates. That kind of did it for us.

We arrived a couple of hours later in the city of Hurricane stopping at the first hotel that advertised vacancies. It was dark but the city lights made for an artificial day time with weird shadows. Whilst Ian was checking us in I noticed the place was alive with young people lurking in the dark places. On the balconies, car park and in the high fenced swimming pool, they were exceptionally happy. The motel had three storeys and apart from the ground floor each room opened up onto a long shared balcony. We had to squeeze past the happy people to get our door open. On the other side of the door a sign “Do not, under any circumstances, open the door to anyone EVER!” The huge gap around the door meant that they were partly in with us anyway!

Another sign read that we will find everything we need in room 13! That night we ate Chinese food in bed and listened to Jayden talk about Zen through the gap in the door.

Next morning I picked up a cardboard bowl from room 13 for my inclusive breakfast and because there was no space to sit I tried to eat brightly coloured hoops with a plastic spoon on the side of a busy road but it all blew away when a truck passed!

We decided to continue heading east towards Monument Valley, I had booked a cabin at Gouldings Lodge but we still had a few days until our arrival date.

“Let’s just carry on East and see what happens”

We had to admit we were feeling a bit lost in more ways than one, being kept awake by Zen hadn’t helped, and the over indulgence over the last few days was taking its toll. Choice of CD for today’s journey Guns N’ Roses, track playing ‘Garden Of Eden’

“Lost in the Garden of Eden

And there’s no one who’s gonna believe this

The fire is burnin’ and it’s out of control

“I think I need the toilet”

“I think I need a gentle head massage, a cucumber sandwich and a sleep” 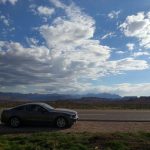 We switched CD’s to Santana, they seemed to have more sympathy for what we were going through. The road took us east for 70 miles out of Utah into Arizona and back into Utah again until we settled in the town of Kanab for a whole three days and a completely different experience …

If you missed the beginning here’s Part 1, ‘California Dreaming’ :