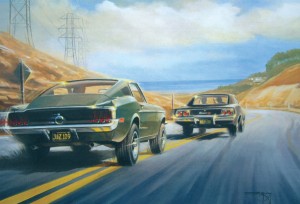 The history-making car chase from Bullitt is arguably the godfather of all car chases. Even if that Beetle turns up too many times, and there’s too many gear changes and unnecessary double de-clutching. Even if you believe the myths and legends surrounding this scene, like the engine sound track being taken from the engine of the ’55 Chevy famous for appearing in American Graffiti and Two Lane Blacktop. Or that when Steve Mcqueen is seen reversing the Mustang so severely it suffers axle tramping, he’d actually mistakenly over shot the corner nearly wrecking the car, this supposedly being the moment the studio executives pulled the plug on Steve’s plans and brought in professional stunt drivers with a little more practical experience and skill. Main driving duties being handed over to McQueen’s good buddies Bud Ekins and of course Bill Hickman, the man seen in the film driving the Charger. Even if that Charger loses at least five hubcaps during the chase, this is still considered the gold standard for which all such scenes are held to this day. 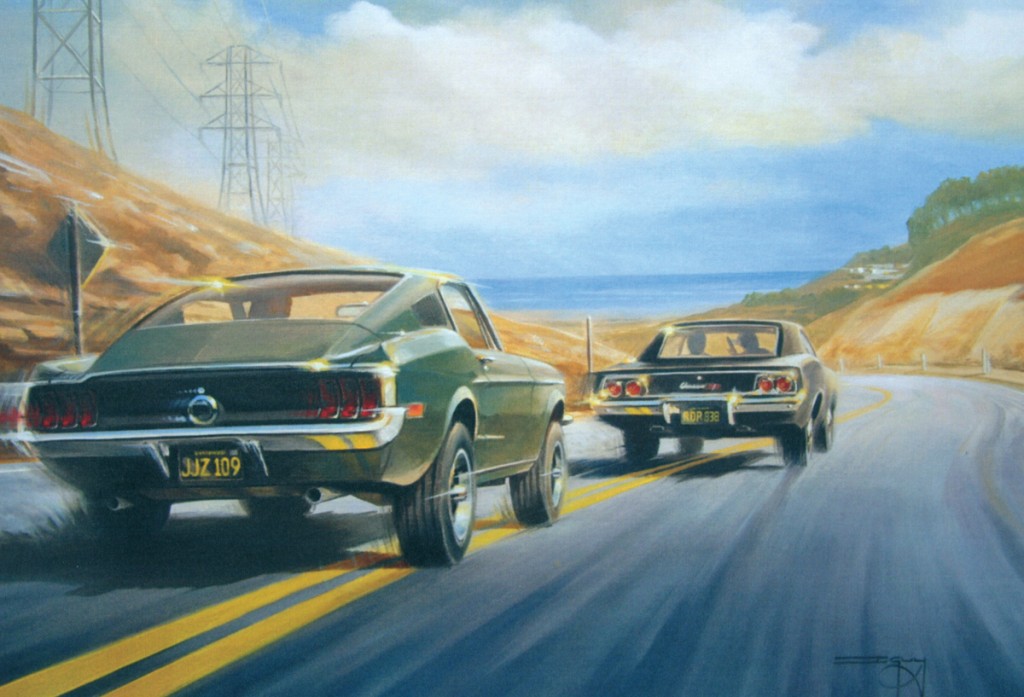 This painting is set near the end of the epic chase having left the centre of San Fransico and heading out towards the coast. On closer inspection you will see the gunman in the passenger seat of the black Charger preparing his shotgun ready to attempt to scare off his pursuer in the highland green Mustang. The infamous gas station is around the next left hand bend. I didn’t want to include it in the painting, that scene upsets me too much!

As a side note, when gathering reference for this painting I came across an issue concerning the fact that more than one Mustang was used in the making of the movie. It seems that only one, some say two, genuine Mustang Fastback GTs were used, other Mustangs not being GTs. It is said that it was Steve Mcqueen’s idea to debadge all the cars to make them look the same. It was a quicker option than trying to rebadge the Mustangs to make them look like GTs and in the end the Mustang looks cool and understated for not having these embellishments. But the fact remained that different Mustangs were used, and while watching the chase scene over and over I realised that in some shots the Mustang’s rear valance had cut-outs for the exhausts and in other shots it didn’t.

Now when I paint a scene from a movie I never just recreate a still from the film, that’d be too easy. I like to create a fresh view that doesn’t exist in the movie, my own take on it, otherwise what’s the point really? And that’s where the painstaking research comes in, leaving me choices like which valance do I use . . .

To answer the question of whether to be true to the ’68 Mustang Fastback GT as represented in the movie, or true to the scene created by the movie makers. Or looked at another way, do I paint Frank Bullitt in his Mustang pursuing the villains in the Charger or Steve Mcqueen driving a Mustang during the making of the film Bullitt ? I chose the later. The story behind the filming of this ground-breaking scene (dare I say it) is more fascinating to me than the whole of the film itself. This is why there are no cut outs in the rear valance of the Mustang! 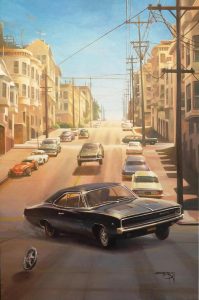 Back to Gallery & Shop

There are no reviews yet.

Be the first to review “Bullitt” Cancel reply